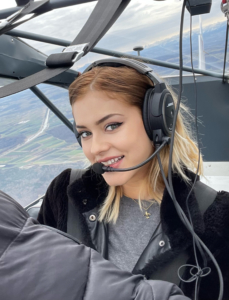 Nadja Keist, a 23-year old air traffic controller and private pilot from Switzerland, is the winner of the fourth annual Richard L. Collins Writing Prize for Young Pilots. Her article, “Understanding Responsibility,” was selected as the entry that best answered this year’s writing prompt: “my first time at the controls of an airplane.” Nadja’s article recounts her first flight as a pilot in command with a passenger, and the in-flight anomaly that tested her decision-making skills.

A normal flight on a beautiful day was disrupted by a Master Warning light and a high oil temperature indication. Nadja followed the checklist and worked with ATC to get back on the ground safely, but she admits the lessons learned cover more than just flying technique: “My first flight as PIC taught me what it meant to hold responsibility over someone.” She also learned what it’s like to be on the other side of the pilot-controller relationship, with implications for her job.

Air Facts Editor John Zimmerman awarded Nadja the $5,000 prize to encourage her aviation and writing pursuits, and the winning article was published in Air Facts. Nadja is currently a private pilot who works as an air traffic controller at the Bern airport.

This year’s contest also offered a second prize, which was awarded to Gus Steffen of Wisconsin for his article, “Fright or Flight.” He describes his first solo, which was memorable not just for the achievement but also for the wasp he encountered in the cockpit on final, and the importance of his disciplined training for overcoming the distraction. Gus was awarded $2,500 and his article was also published on Air Facts.

The Richard Collins Writing Prize for Young Pilots is funded through the royalties from Collins’s book sales and is augmented by contributions from his children, Richard, Jr. (who was also one of the judges), Sarah and Charlotte. 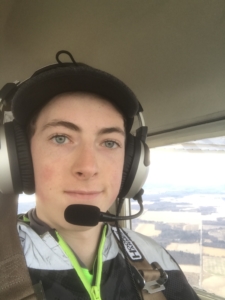