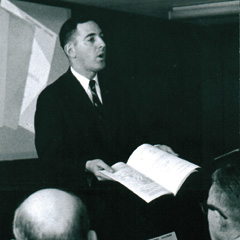 More than a Pilot Shop

Sporty’s Pilot Shop was founded in 1961 by Hal Shevers and was originally located at Cincinnati’s Lunken Airport. Like many entrepreneurial ventures, Sporty’s began small. When Hal was flight instructing, he began to sell pilot supplies to his students. Soon there was a small store at Lunken, followed by a new, larger facility at Clermont County/Sporty’s Airport, in Batavia, Ohio. All operations were moved to Sporty’s current Clermont County/Sporty’s Airport location in 1990. From humble beginnings, Sporty’s has become the world’s premier pilot shop and developer of aviation education programs.

In 1987, Sporty’s Academy was founded to develop aviation education courses and to produce videos that teach pilots everything they need to know about aviation. From weather and safety to technique and air traffic control, and all focused on real-world flying. This was a natural brand extension for Sporty’s as Hal had been a pioneer in developing the three-day ground school course in partnership with the AOPA Air Safety Foundation.

Today, Sporty’s Academy is an FAA-approved Part 141 flight school and provides flight training for hundreds of students a year, including international students as well as for the University of Cincinnati’s Professional Pilot Training program.

The airport is also home to Sandy’s Airpark at Sporty’s, a gated, 13-acre residential airport community with wooded surroundings featuring common green space and access to a general aviation-friendly airport. In all, eleven homes with hangars will be built in this airpark. 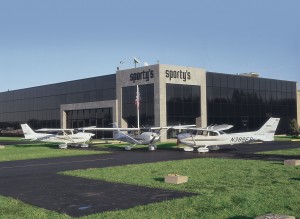 Sporty’s Pilot Shop and Sporty’s Academy are right on the runway at I69.

In addition to Sporty’s Pilot Shop, the company markets merchandise to the affluent homeowner through Sporty’s Preferred Living and Sporty’s Tool Shop. Wright Bros. Collection, a fourth title, was launched in 1993 and features aviation-themed gift products for pilots and aviation enthusiasts.

In 2008, Sporty’s began offering its entire library of educational programs in multiple formats including DVD, online streaming, downloadable format and mobile phone/tablet applications. Sporty’s has been a leader in iPad app development and education, including the iPad Pilot News website.

Sporty’s corporate philosophy is summed up by Founder/Chairman Hal Shevers: “The focus of our business remains educational. We educate pilots to be safe and proficient.” Adds President Michael Wolf, “We have also evolved with the times, with a strong presence on social media sites, developing iPhone apps, publishing eBooks and reaching pilots and aviation enthusiasts in whatever new media channels are available.”

Today, Sporty’s is one of the most respected names in aviation. With corporate activities in every segment of light aircraft from training to maintenance to aircraft sales along with hangar space for more than 150 aircraft, Sporty’s has evolved from the “World’s Largest Pilot Shop” to “More Than A Pilot Shop.”