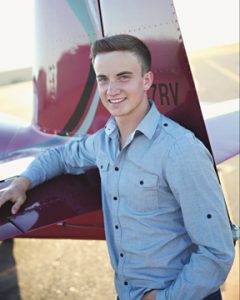 Chandler Webb, a 19-year old commercial pilot from Oregon, is the winner of the second annual Richard L. Collins Writing Prize for Young Pilots. His article, “Pilot in Command,” was selected as the entry that best answered this year’s writing prompt: “an event that changed or shaped the author’s flying.” Chandler’s article recounts a long cross-country flight with his mother and father that didn’t go as planned, and the valuable lessons he learned.

When the family encountered changing weather conditions en route, Chandler and his father (also a pilot) were unsure who the real pilot in command was, and the Cessna 182 entered clouds. As Chandler admits, he was afraid to be assertive “because I was the ‘kid.’” He eventually found a hole and landed safely. It was a mistake, but he says, “never again will I let anyone question my authority as the Pilot in Command.” The winning article may be read in full at airfactsjournal.com.

Air Facts Editor John Zimmerman awarded Chandler the $2,500 prize to encourage his aviation and writing pursuits, and the winning article was published in Air Facts. Chandler is currently an instrument-rated commercial pilot who works for Van’s Aircraft in their Aircraft Assembly Division, but his interest in flying started early: he started flying when he was 14, soloed at 16, earned his Private Pilot certificate at 17, Instrument Rating at 18, and Commercial certificate at 19. He has big plans for the future too, including earning his Associate of Applied Science degree in the fall, finishing his CFI and CFII, serving a mission for his church, earning an A&P rating, and pursuing a bachelor’s degree in aviation management. His eventual goal is to start his own aviation business.

The Richard Collins Writing Prize for Young Pilots is funded through the royalties from Collins’s book sales and is augmented by contributions from his children, Richard, Jr. (who was also one of the judges), Sarah and Charlotte.