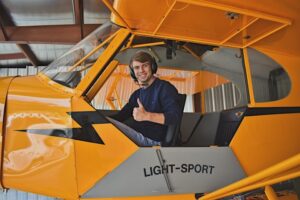 Michael Brown, a 23-year-old instrument and seaplane rated pilot from Tennessee, is the winner of the third annual Richard L. Collins Writing Prize for Young Pilots. His article, “The Wrong Stuff,” was selected as the entry that best answered this year’s writing prompt: “my most memorable or important flying lesson (with or without a flight instructor).” Michael’s article recounts the lesson he learned trying to impress his first non-familial passenger in a Legend Cub on twin amphibious floats.

When his passenger asked if they could land on the water, Michael let his ego make the decision. As he admits, “I didn’t want her to think I didn’t have the confidence or the right stuff enough to do what the plane was designed to do.” After landing he quickly realized safely taking back off was going to be an issue. The winning article may be read in full at airfactsjournal.com.

Air Facts Editor John Zimmerman awarded Michael the $2,500 prize to encourage his aviation and writing pursuits, and the winning article was published in Air Facts. Michael is a private pilot with 280 hours total time and an instrument and seaplane rating. He comes from a family of aviation. His grandfather worked for Delta Airlines for 37 years and his father is a pilot. Michael graduated from Texas Christian University last May with a double major in Business and Communications. He is currently a first-year law student at Tulane University, where he hopes to become a transportation attorney. When he is not flying or studying, Michael enjoys biking and cheering on his Atlanta Braves.

The Richard L. Collins Writing Prize for Young Pilots is funded through the royalties from Collins’s book sales and is augmented by contributions from his children, Richard, Jr. (who was also one of the judges), Sarah and Charlotte.