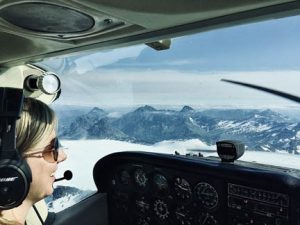 Cory Gordon had two dreams while growing up in Virginia – to live in Alaska and to become a pilot. After graduating from high school, she said goodbye to her family and moved to Alaska. While Gordon had an interest in flying airplanes from a young age, it was experiencing general aviation as a way of life in Alaska that inspired her to take a discovery flight in a Cessna 172 Skyhawk. Gordon would go on to earn her Private pilot certificate in Anchorage.

Now Gordon, a current resident of Phoenix, Arizona, is the recipient of Sporty’s latest $2,500 flying scholarship awarded through her membership in Sporty’s Flight Crew program. “Learning to fly was the most arduous undertaking of my life yet my proudest accomplishment,” remarked Gordon. “I look forward to using this scholarship award toward my next goal of earning an Instrument Rating.”

After spending 10 years in Alaska, Gordon returned to the lower 48 to attend law school. She relocated to the Phoenix area to work as a public defender and soon rekindled her passion for flying. Gordon engaged the local chapter of the Ninety-Nines, an international organization of women pilots, for guidance and support. She is currently using her Sporty’s Flight Crew membership to train for her flight review before embarking on her Instrument training. Gordon intends to pay it forward by continuing her work with the Ninety-Nines to support women in aviation.

Sporty’s Flight Crew is a three-level customer benefit program that rewards customers with access to training programs, unlimited free shipping, an on-call personal Sporty’s shopper, and more. The top two levels (gold and platinum) include the opportunity to apply for a $2,500 flying scholarship.

It’s easy to enroll as a Sporty’s Flight Crew member by visiting sportys.com/flightcrew.