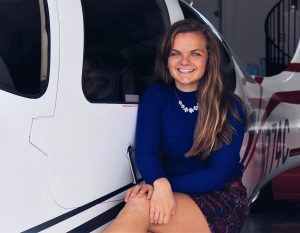 Emma Hutchinson, a midshipman at the United States Naval Academy, is the winner of the inaugural Richard L. Collins Writing Prize for Young Pilots. Her article, entitled “The Old Man in the Plane,” is a tribute to her grandfather who instilled in her a love of flying and flew with her often, teaching her the fundamentals of flight.

In her article, she writes, “My grandpa told me the sky was his church, the place he felt the presence of a higher being, always present. He guided me to start my own journey in the old plane, this time with a new instructor.” The winning article may be read in full at airfactsjournal.com.

Air Facts Editor John Zimmerman will present the prize of $2500 to Hutchinson during this year’s upcoming Sun ‘n Fun. “The mastheads of aviation magazines, along with numerous bylines, speak to the young people Richard mentored in his long career,” said Zimmerman. “Finding new writing talent in aviation is a natural progression of what Richard thought was an important duty.”

At the United States Naval Academy, Hutchinson is pursuing a Bachelor of Science degree in English. She earned her private pilot certificate in 2017 and flies during her leave from school and military obligations. She is a member of the USNA cycling team, paints in her free time, and writes daily. She is the second oldest of five children and believes her family to be her greatest support and motivation. Upon her commissioning, Hutchinson desires to fly helicopters for the Marine Corps, a goal of which she says her grandfather, Ronald Hutchinson, would be proud.

Based on the success of this first year’s Writing Prize, plans are underway to continue this award in 2020. Details will be posted at airfactsjournal.com later this year.

The Richard Collins Writing Prize for Young Pilots is funded through the royalties from Collins’ books and is augmented by contributions from his children, Richard, Jr. (who was also one of the judges), Sarah and Charlotte.